Welcome To The Doof

‘Doof’ is a mystical word that has spread across my own social media news feeds over the past six months, it’s usually plastered on pictures of young people donning harem pants, a spattering of face paint and a ying yang pendant or a piece of quartz. Oh, and drugs, lots of drugs.

No, not everyone that goes to these Doofs wears the hippy rags and takes enough stimulants to turn Stephen Hawking into The Flash, but drugs and psychedelic paraphernalia are undeniably a huge part of the scene. 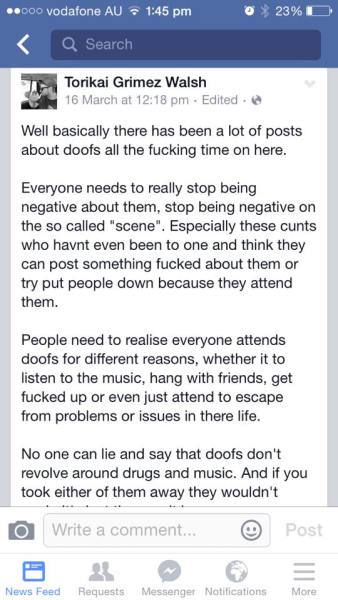 These Doofs find their foundations in traditional psy-trance festivals which stem from the electronic hippy raves in the 1960’s and 70’s in Goa, India, but a Doof is less techno-woodstock and more psychedelic-house party.

Doofs are the G spot for adolescent’s – It’s not palm readings and DMT on a beach in India but a bush filled with the kids that loved drugs the most in high school and don’t really feel at home in nightclubs.

Here is what I got from a few weeks of following the Doof scene in northern New South Wales and South East Queensland.

Unfortunately as dawn broke on the second and final day of my first Doof experience ,Carter, had disappeared into another astral plane. After a night of non-stop progressive psytrance echoing through the hills of wherever the fuck we were, I found myself watching the sun rise to some more relentless thumping bass joined by a group of people, that had by now, basically raved themselves into another dimension. so I quickly realised it was time to say goodbye, But I was determined to find out more about these secretive Doofs and why they have only just now begun to emerge in mainstream party culture. (0:43 – 1:13)

Saffron and her friends have only just discovered the underground world of Doofs. With every venue usually being in the middle of nowhere in a forest or on someone’s farm and with the exact addresses protected by the moderate security of invite only Facebook events. I was curious to see how newcomers get introduced to the scene. (2:06 – 2:23)

But what has drawn this young crowd to a sub-culture that used to be dominated by middle aged men and women, tie-dye garments and white people with dreadlocks. (2:43 – 2:53)

So the combination of social medias ability to mobilize large groups of youths and the Doof’s evolution from psychadeliv music to a more commercialised dance music breed has attracted flocks of young people that aren’t quite ready to dive straight down the rabbit hole into a scene of contact staff twirling and DMT but have discovered a middle ground where the music and drugs are a more comfortable step away from the house party scene. (4:05 – 4:28)

As more and more young people are drawn to the Doof world and as a result have begun to drag it into the mainstream; will it’s psychedelic and spiritual foundations live on or will the tie-dye hippies be replaced with short skirted girls guys in drop sleeves and a home for the drug loving youths that may not have much direction or their own place to throw parties but sure know how to get fucked up. (5:14 – 5:34)